explaination of a name.

I don't like this post, it's not my best writing, and therefore quite sad, but it was on my mind at the time & I can't be bothered to make changes. ha!
This is my logo, and I am extremely proud of myself for masterminding it. I can say this with confidence and a bit of arrogance because finding the label name and logo to go with it is difficult, while at the same time pivotal to a business. This is the theme which everything now will grow from.
Astoria: Famously the city in New York state named after John Jacob Astor (rich entrepreneur whose demise was the Titanic). Also historically known as the small town in the northwest corner of Oregon where the explorers Lewis and Clark bunked out for one miserably rainy winter. They had failed at discovering a Northwest passage, but their trek was soon retraced by those tempted with the eagerness to get rich from the fur trade. John Jacob Astor was noticeably the most profitable and hence this settlement was named after him, albeit he never ventured out west.
Being the first established U.S. settlement west of the Rockies [other sources say the Mississippi River], there is a load of mystery bundled up in Astoria. Quite a lot of history, and some of it lies underground.
Knowledge of underground passageways and rooms beneath city streets are nothing new –they are, however, undisputably intriguing. Astoria, like its wooden street cousin Seattle, has had its share of fires, the worst was in 1922. Both had to be rebuilt, both built up from the rubble, both have musty dilapidated undergrounds. Unlike Seattle, Astoria’s underground system is not interconnected. Most are large rooms or corridors from a small basement only accessible through downtown businesses. There are only a few entrances that I know of personally, one from the lower level of J.J. Newberry (called something else now). I’m sure if I asked around I could find all of them… perhaps there’s a listing.
London has its famous Underground logo, which is, c’mon, just a bunch of subway stations. Imagine the world all worked up over the Los Angeles Metro system logo… I just think the idea of a city being defined by such icons is funny –and yet I’m using that premise to put Astoria back on the map.
In recent years (after The Goonies craze) the popularity of the city has dwindled, as well as the romanticism. Even before you’ve entered city limits, you cannot help looking at the abundance of Queen Anne architecture blanketing the hillside. The united States of America is still quite young and yet Astoria has had Europeans walking its turf for over 200 years: British, Spanish, French, Danish, Norweigean, Finnish… even cargoships full of shanghaied Chinese. Did you know the Japanese shot ammunition on the US mainland during World War II? They did, at Fort Stevens, and we shot back. The Astoria-Megler bridge is the longest three-span truss in the world, at just over 4 miles long. The first post office west of The Rockies was established in Astoria, as well as the first US Customs house [ever].
This is all to say I love this city, but there is also darkness which hovers there. It can be felt in the air, seen on the face of its citizens. It sounds ridiculous, but by taking the name of the city as part of my own, I feel as though somehow this is prying the hold of an unknown eeriness which has been clinging to the West’s foundation for two centuries.
Posted by Val. at 2:43 PM 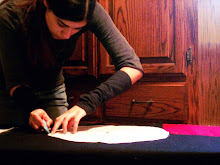 other places I'm at.